Kamala Harris has made history in American politics.

From her famous rapid-fire questioning to the now-iconic line, “Mr. Vice President, I'm speaking,” Senator Kamala Harris is known for being a tireless champion for social justice, racial equality, women and LGBT+ rights, environmental justice, and more — all while donning her signature Chuck Taylors.

After gaining political momentum over the last few years as a Senator, she turned heads when she ran for the Democratic nomination in the 2020 presidential race. Her campaign struggled to present a cohesive platform, however, and she eventually dropped out of the race. After backing Joe Biden, she was picked to be his running mate — but she is much more than that.

Born in Oakland, California on October 20, 1964, to Shyamala Gopalan, a cancer researcher and activist from India, and Donald Harris, an economist from Jamaica, Harris was involved in social justice and activism from a young age.

As a first-grader, Harris was bused to Thousand Oaks Elementary School, which was in its second year of integration. After moving to Montreal for her mother's work, 13-year-old Harris and her sister led a successful demonstration in front of their apartment building in protest of a policy that banned children from playing on the lawn.

From there, she went on to earn her undergraduate degree in political science and economics from Howard University, a historically Black university, where she was also a member of the first historically African American Greek-lettered sorority, Alpha Kappa Alpha. She then received her law degree from the University of California, Hastings.

Harris began her career in the Alameda County District Attorney's Office, moving up to District Attorney of the City and County of San Francisco, and was eventually elected to serve as California's Attorney General.

In 2017, Harris was sworn in as the United States Senator for California — and later went viral her sharp questioning of then-Attorney General Jeff Sessions. After 3.5 minutes of persistent questioning, Sessions said, “I'm not able to be rushed this fast! It makes me nervous.”

Since taking office, she has introduced and co-sponsored legislation ranging from raising wages for working people to expanding access to childcare for working parents.

After the killing of George Floyd in 2020, Harris has been vocal about the injustice faced by Black people in the United States. She introduced police accountability legislation known as the Justice in Policing Act and sparred with Senator Rand Paul, Republican from Kentucky, after he blocked a bill that would have made lynching a federal crime.

Meanwhile, she teamed with Democrat Representative Alexandria Ocasio-Cortez of New York to propose legislation that would establish an independent Office of Climate and Environmental Justice Accountability to rate environmental laws and rules based on their impact on low-income communities.

To honor Harris' life and career so far, we decided to give her resume makeover. But how were we going to fit all of her accomplishments into a two-page document? That's where the professionals come in.

TopResume expert writer Billie decided to focus on Harris' efforts throughout her career that have formed the basis for her current stances and policy positions. With her dedication to the rights of vulnerable communities being the backbone of her current political persona and directly relating to her goals, Billie focused on the experiences that shape Harris' pioneering, justice, and human rights centered ethos — which would be most informative when determining her potential as a future U.S. Vice President. 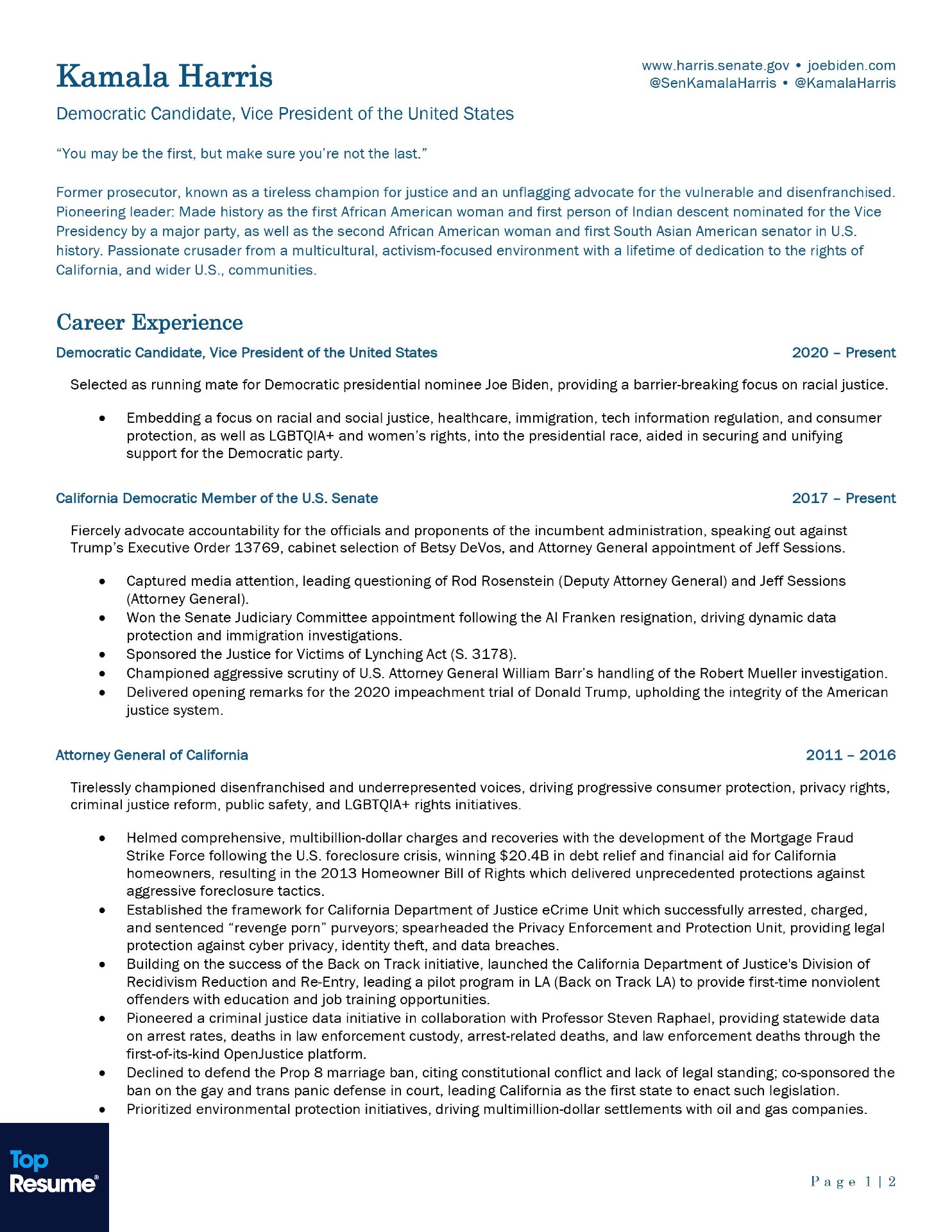 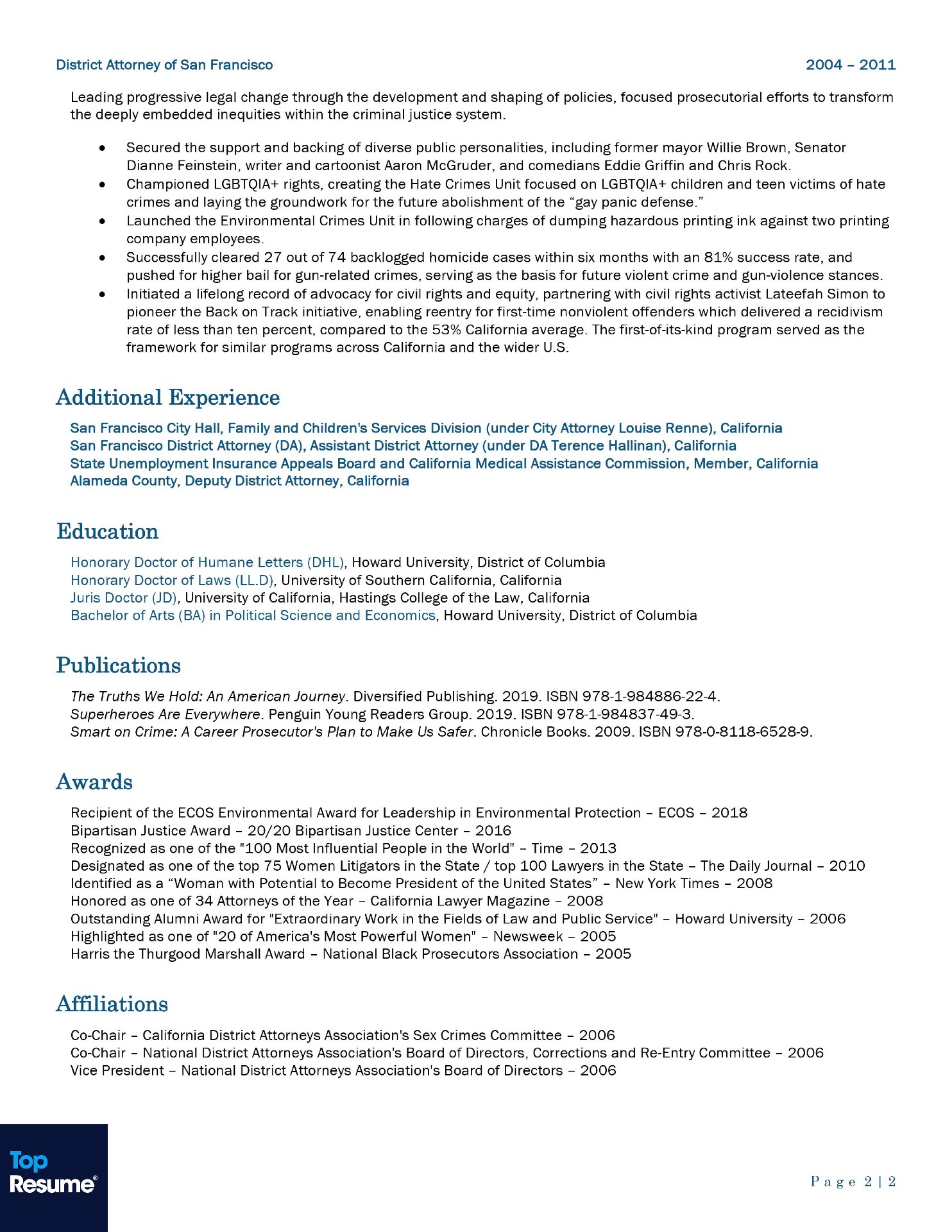 When it comes to standing out in a competitive job market, you need a resume that will rival Harris'. Luckily, our expert writers know how to do just that!

What It's Really Like to Work With a Resume Writer See how your resume stacks up.

Get a free expert review

Subscribe today to get job tips and career advice that will come in handy.